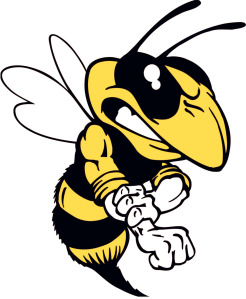 Tonight, the four of us attended another basketball game to solicit text votes from the varsity girls audience. The people at Zion are awesome. We LOVE Mr. Bible, Mrs. Clark, and all the wonderful cheerleaders that helped us during half time and gave us permission to be there. So you kinda need to read the blog entry Angel Bee to understand….but I wanted to add to that moment. Tonight, the gracious cheerleaders invited Brooklyn to “bee” a cheerleader with them. She sat with them during the half time sparkettes routine and even joined them on the sidelines as an honorary cheerleader. She loved it and even tried to clap and dance a bit. I was very moved that they took to her so easily. Kinda hard not to with those curls 🙂 Anyway, we had a great time and got a lot more votes so that was awesome. We will be with our “own” high schoolers this weekend at winterXtreme so we will be unable to attend the Saturday afternoon games but Jut and the kids may venture out to the evening games at 6 and 7 to go out during half time. even if we are not there, they are going to announce it and they hung the posters in the gym. Also, a lovely security lady I spoke with is taking flyers and announcing it at her church in North Chicago and telling all her family to text! Thank you, Zion family!

We were a little late to the game because Jut was selling a mini van that Uncle Dan and Aunt Jill donated to their trip to India. We are choosing to believe this was a God thing. A man saw the van on craigslist. He called Jut and was trying to talk down the price. Jut was getting an uneasy feeling about the guy becuase his offer kept getting lower and lower. They settled on a price and Jut asked for it in cash. He showed up in a broken down van with his wife and 3 kids. He didn’t have any idea the money was going to India, or that Jut was a Christian. Basically, Jut told him what was wrong with the van, and they took it for a test drive. The guy looked at Jut and said that he didn’t know much about cars and would just be trusting Jut. Good thing Jut is as honest as they come. Long story short, the guy claimed to be down and out, had 3 kids and just needed this van to get back on his feet. He was a Christian, and had been praying and this van is just the thing he needed to help climb out of this hole. He had all the cash he had and was still $100 short. Jut had a change of heart and decided, as this man repeated, I’ll send you the rest next week, I’ll send the rest I promise. He had given all his money away and asked Jut for one more favor, $20 to get gas to get back home, so Jut gave it to him.

We don’t know if this was a good line or not…but I am learning it is not about the character of the person you are giving to or what they do with the gift you gave that matters. What matters most to God was if you were obedient and gave. Hard lesson to learn, but Jut is a great person to learn generosity and obedience from.